This blog will provide an opportunity for you to gain insight into the Year Nine and Year Ten students’ seven day journey of personal development while on their Outward Bound program in the beautiful national parks of northern New South Wales.

The Hunter Youth Leadership Project is made possible thanks to the generous support of the Coal and Allied Community Development Fund, which supports local projects in the Hunter Valley in a range of areas including business development, education and training, health, environment, and arts and culture. The aim of this fund is to increase the long-term sustainability of communities surrounding its three operations in the Hunter Valley and ensure the dependence on mining activities decreases over time.

The Hunter Youth Leadership Project sees students from state and catholic schools across the Hunter come together in an environment that encourages personal growth and development through a series of outdoor challenges.Outward Bound Australia and Coal and Allied have partnered on this project with the following objectives:

Don’t forget to bookmark this site so you can check in regularly to read about the students’ experiences and adventures while on Outward Bound! 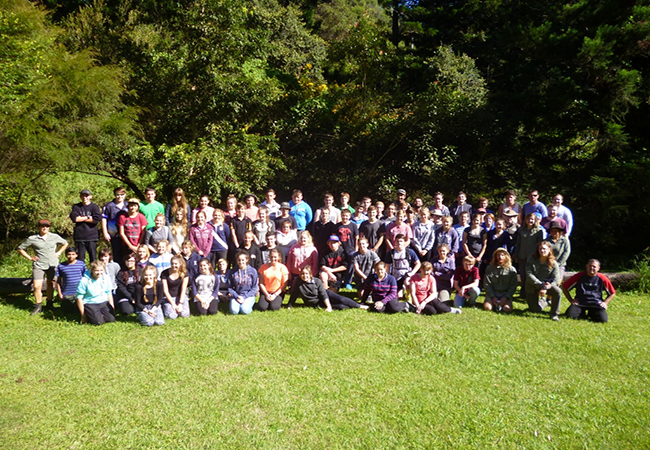 In the dark of the night, the participants left the comforts of their homes nestled in the Upper Hunter area of NSW to be greeted by an early morning in the Northern Rivers.

The day began with a welcome and info about the program and area, followed by a tasty morning tea of handmade goodies from the kitchen. The participants were then split into their camp groups for photos and soon after were off to begin their journey Outward Bound!

The year 9’s headed to the camp ground where they were to load their hiking bags for the days ahead.

The first activity to kick off their experience was Raft Building! Getting into the water at the dams was a challenge for some of the students, but once in, the laughter was infectious. A couple of the rafts didn’t hold together, which helped spread the laughter throughout the group. At the end of a long, first day both groups enjoyed a tasty dinner of beef stir fry. They each settled into camp life for the night wondering what the days ahead would entail.

The year 10’s took part in a Leadership workshop for most of the morning. Initially everyone was quiet, but when the speaker introduced “The Moon” game to the group, it got them moving and giggling. This really helped break the nervous anticipation in the air.

Today the participants learnt some valuable lessons around life choices, the ones we can change and also the one we cannot. They all really enjoyed the workshop.

The afternoon was spent setting up camp, however it was a little difficult when the added the challenge of no talking was implemented!

The afternoon was also spent preparing for the climb up Mt Warning which would begin early the next day. It was a huge day for all, and was finished off by being immersed in community service, pulling out invasive weeds from along the Upper Tweed River. 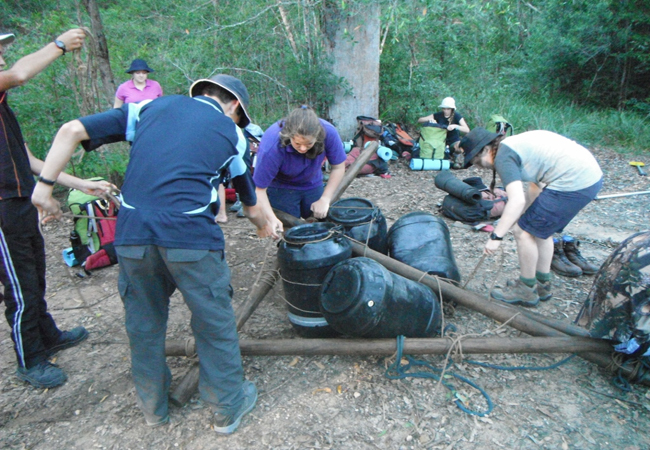 It was an extra early start for the year 10’s this morning who crawled out of their sleeping bags before the sun had risen. Today was the day they would climb Mt Warning (1159 meters). Mt Warning is an iconic land mark in the Northern Rivers, due to its size and history. Many years ago it was formed by an active volcano. It also hold great significance to the local Bundjalung tribe. It was a tough hike with a solid 4km’s uphill and a rock scramble to the summit. With team support all participants made it to the summit to be greeted with spectacular views. Everyone was blown away with the view and their efforts as a team.

The participants returned to base after their arduous climb for another activity. The Leap of Faith, which involves climbing 8 metres to the top of a pole and jumping off to touch a hanging buoy. With screams, squeals and laughs heard from a far, everyone had a great time. The day finished off with some packing ready for expedition as well as delicious meal cooked by the kitchen staff, a luxury which the group would soon miss.

The year 9’s started their day with some mountain biking! Group 1 headed out to Mebbin National Park, where they started mountain biking. The group had a few funny moments whilst learning mountain bike skills. A sudden squeeze of the brakes too hard and they went over the handle but bounced back up like nothing had happened. Everyone laughed for hours.

Group 1 really enjoyed the mountain biking today! Majority of it was down hill, however they found the 1km hill at the start a challenge but they pushed themselves and got though it.

Group 2 had an early bus ride to the start of their big hike through the Nightcap National Park, where they walked along part of the route that was used as the postal trail between Lismore and Murwillumbah at the turn of the century. As the day wore on, the participants found the end of the 13km hike challenging. The team worked together, listening to the leaders of the day and made it to camp without complaining despite beginning to feel the pressure of carrying full hiking packs. After becoming settled in camp the instructor taught the group a game called ‘HA HA’ it made the camp site roar with laughter and ended in each group member bonding over the funny moments of the day. 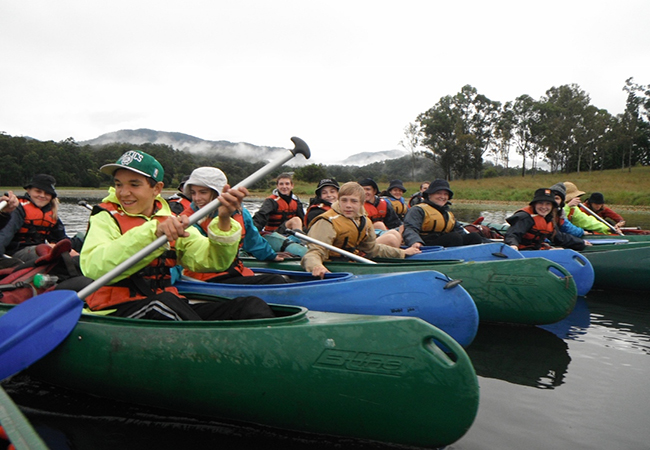 The participants woke up to a clear morning on Day 3. All the groups were heading out on expedition today, so it was an early morning for all. By this stage in the program the groups are getting faster and faster with their camp pack down! This will give them more time throughout the day to achieve their goals and get to camp.

Group 1 had a morning filled with a 7 meter abseil. Most of the group felt uncomfortable with the height of the abseil, however when it came time to tackle the challenge the group really pulled together, encouraging each other. Everyone took on the challenge and pushed out of their comfort zone.

Group 2 enjoyed a lovely day of hiking. The group found the navigating and map reading challenging, and found by sharing ideas and information it made it much more comprehensible. The instructor began telling ‘dad style’ jokes about a tractor, and somehow this kept the spirits alive in the group! The year 9 instructors mentioned that both groups were really starting to bond and get to know each other really well.

The year 10’s have been equipped with new leadership ideas, and given the equipment they will need for the next 3 days out in the bush whilst they explore different parts of the Northern Rivers Circuit. While out there, participants will have the opportunity to put this new knowledge to the test and try out different ways of working together. 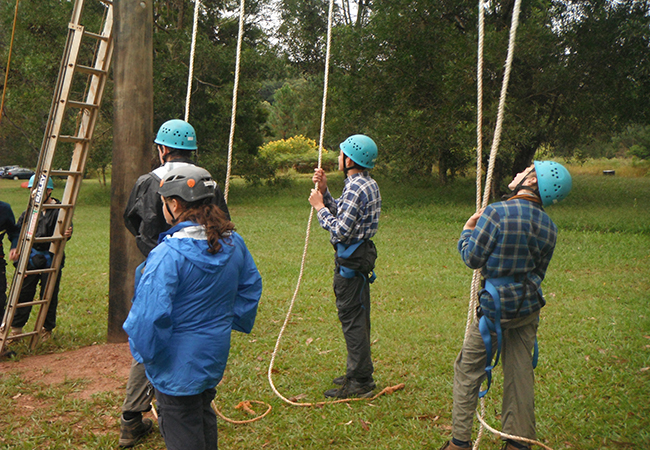 The staff at Outward Bound Australia have been watching the weather over the past few days, hoping that the weather system approaching was not going to bring as much rain as predicted in the forecast. Unfortunately, this was not the case. Many conversations were had and the decision was made for the Hunter Youth Leadership Program to finish a couple of days early. While we here at Outward Bound Australia encourage healthy risk taking, there were a number of factors that contributed to this decision. Safety is a paramount focus, especially after seeing the power of nature that had recently hit the Hunter Region.

The students were disappointed that the program was going to finish early, they were keen to make the last day in the bush count.

Group 1 had a 6.2km hike to their designated pick up location. A funny part of the day was to try and avoid the cow paddies while walking through the cow paddocks! While this group were happy to be back at base, they were sad that the program was coming to an end. Pacts were made to come back for year 10.

Group 2 were fast at packing down camp and got to canoeing early. Before their activity the group really enjoyed playing the time bomb game. They really enjoyed the canoeing, and wished they could do more days of it! Once back on base, the group participated in an activity called Lily Pads, which involved a lot of team work for it to be successful.

Group 3 were hiking the historic Nightcap Trail and made great time to have lunch at a place called the Postman’s Tree. During lunch they were able to have a good laugh about anything and everything, though they found that once they stopped they would get cold quickly. To avoid this, instead of taking long breaks, they would keep breaks short and make sure that everyone pitched in. The students were proud of themselves and excited to be back at base camp.

Group 4 hiked back from the outer edges of the Outward Bound Australia property after sleeping at Mebbin National Park. The group worked well at packing down camp, with today being their fastest yet. Some of the members found the hiking on this day a challenge and they found it easier by keeping positive.

Group 5 were proud of their pack down time as well, considering the rain showers that were lingering. They kept motivated while hiking, hitting their goals and motivating each other to make it happen. They enjoyed getting back to camp and having a chat in the rain along the way. The group talked about their mixed emotions, some were happy, some were tired while others were excited and sad. 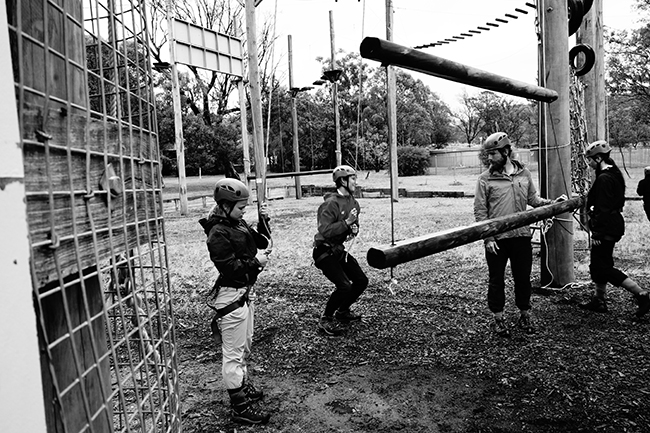 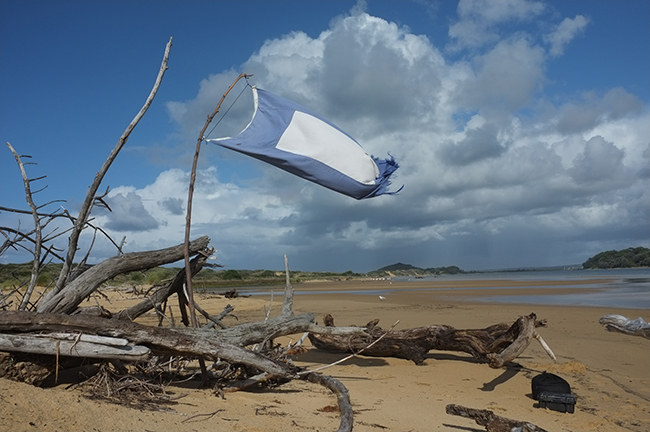 Bush Cook Tips – Get Your Roast On!!
All Articles
Subscribe to
our eNewsletter