It’s been an action packed couple of days spent at Outward Bound’s national base in Tharwa, ACT. The group spent the first day getting to know each other with some name games, and then completing the individual ropes course, which finishes with a flying fox over 50m!

The morning of the second day was spent completing the Giant’s Ladder; a team ropes challenge that can only be climbed with the assistance of another person. The group have taken these activities in their stride and are rising to the challenges being placed in front of them.

The afternoon of day two saw the group receive their expedition briefing, and they are now in full swing getting ready for their first expedition: four days of hiking through the northern part of Kosciuszko National Park!

Stay tuned for more blog entries as the group begins their epic journey!

The 2015 Summit To Sea group are now officially named “The Cotters” after a local settling family. The Blue Peter ceremony was the significant moment of the day. It involved raising the Blue Peter flag before departure from National Base. The group was reminded of the significance of this flag to sailing ships “A ship in a harbour is safe, but this is not what a ship is built for”. With this message the group was farewelled and began their Summit To Sea expeditionary journey.

Day 4 was the beginning of ‘The Cotters’ initial hiking expedition. The group navigated while hiking through the sub-alpine northern part of Kosciuszko National Park. On this expedition they learnt how to navigate as well as the basics of living in the bush. It rained every day which proved to be a valuable lesson in the need to have well water proofed back packs and design rain resistant bivvies to keep dry under whilst sleeping. Despite unusually wet conditions for this time of the year, the group persevered and made it to their rafting activity on time.

A welcome relief from carrying back packs with some rafting on Eucumbene Dam. This was a full day of flat water rafting on the largest storage dam in the Snowy Hydro scheme. The group was very glad that the sun made an appearance and enjoyed the opportunity to spot a few wild brumbies on the shore line! 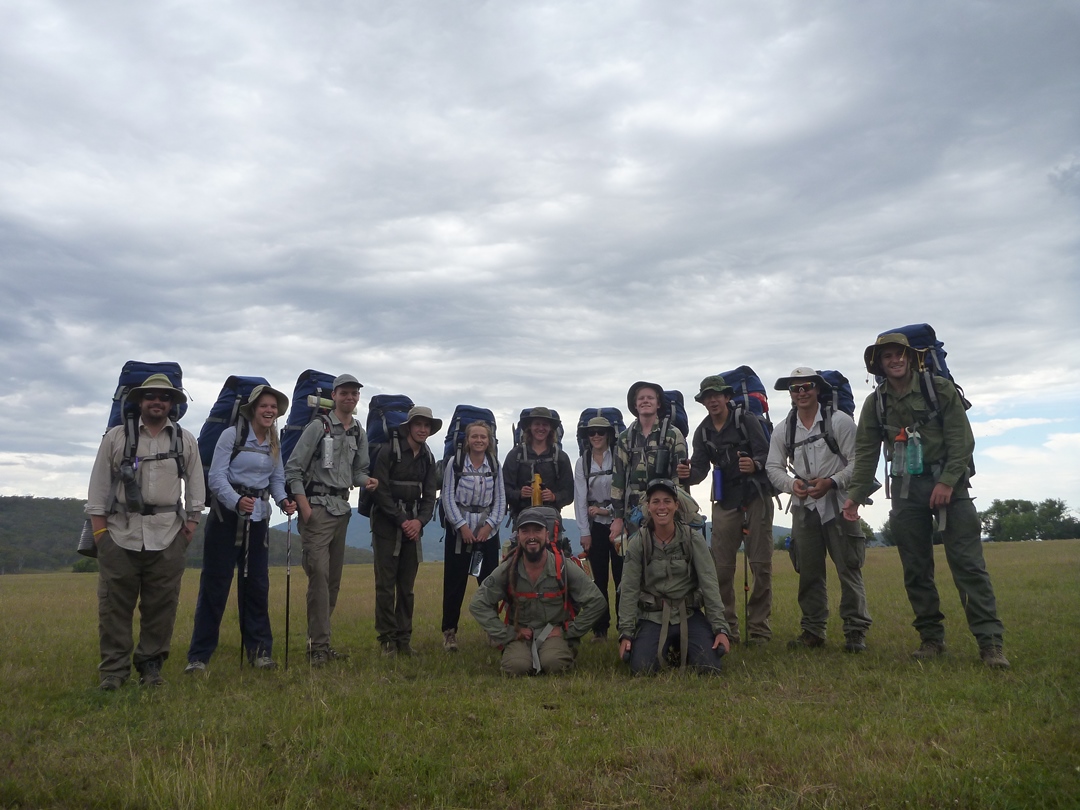 Two days of mountain biking – what a hoot!! The “Cotters” were very keen to get on their bikes. The mountain biking section of the program is a great individual challenge with some long hills (a 6km climb on day 9, and a 16km climb up to Guthega on day 10!!). However, the group still worked together, encouraging each other along the way. Many participants were very keen to take on the challenge of staying on their bikes the entire way, a particularly impressive effort given the amount of rain that fell on the way up to Guthega (50mm in 24 hours). They were rewarded with some fantastic views on the peaks and some fast downhill sections! 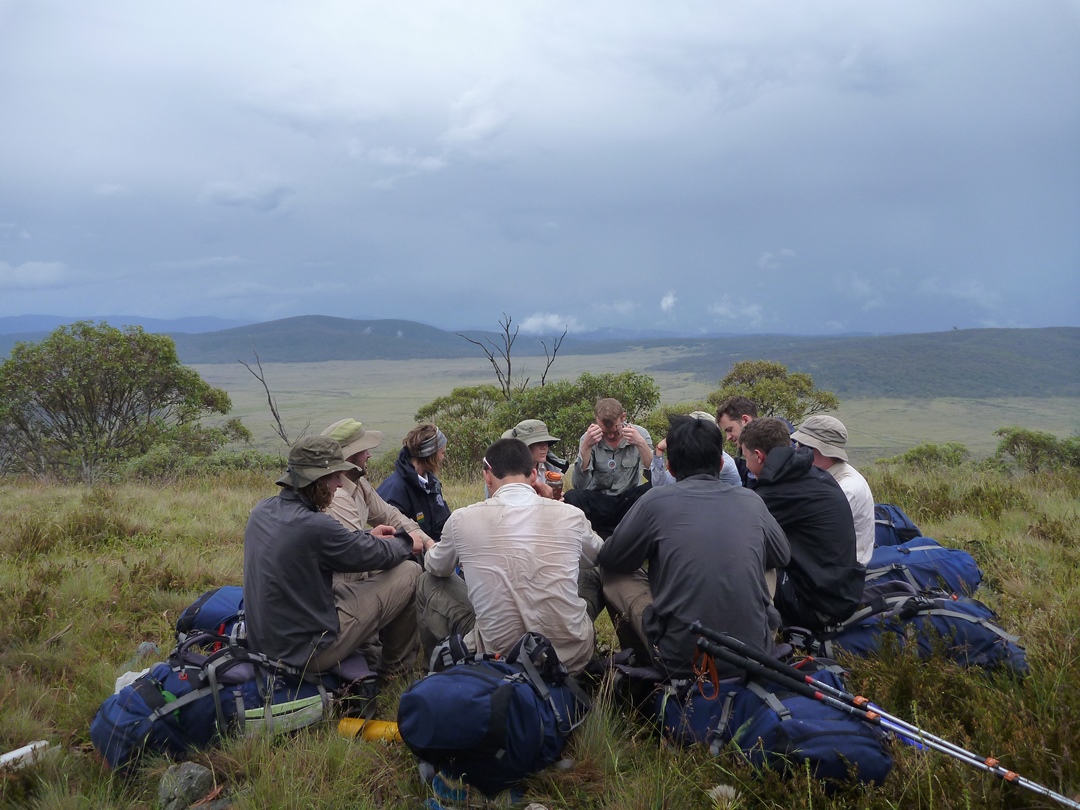 This two day expedition was ‘The Cotters’ opportunity to hike on the main range, which is the roof top of Australia. On Day 11 they worked hard in the morning and were rewarded with a sunset view from Mt Townsend, arguably the most spectacular mountain-top in Australia, as well as being our second highest peak standing at 2,209m!

The Cotters camped that night in between Mt Townsend and Mt Kosciuszko and after enjoying a starlit night and the sunrise from their camp, they climbed Australia’s highest peak. From the top of ‘Kosi’ the group took some time to enjoy the view and reflect on their journey so far, before finishing off their hike with a mostly downhill walk to transport which whisked them away to the beginning of their rafting journey.

All in all, the main range was a real highlight for the Cotters. With the sun finally coming out for more than a few hours, and some of the best views of the journey so far!

After being dropped off and setting up camp in the dark, the Cotters woke up on the banks of the Snowy River. Now dammed as part of the Snowy Hydro Scheme, the river nonetheless remains as one of the most iconic wilderness experiences possible in Australia. After enduring rain for the first part of the course, the Cotters enjoyed some of the benefits, with a very strong flowing river pushing them along and taking some of the time pressure out of their days. This enabled them to spend a bit more time sitting around their fire in camp each evening which led to some valuable group discussions.

One of the highlights of this part of the trip was “Performance Night” – where each member of the group donned a clown’s red nose and put on an individual performance for the rest of the group! Needless to say, comfort zones can be pushed in a variety of ways and there was a considerable amount of hilarity. The Cotter’s spent three and a half days on the river and are now on the Solo component of the program. This involves each member of the group spending three nights camped by themselves and given some tasks to help them reflect on their journey and everything that they’ve learnt. During this time the participants are checked by the instructors, and are within whistle range in case of any urgent need. Otherwise, they are left to their own devices and are responsible for setting up their own shelters and preparing their own food. It is a unique opportunity for self-reflection, free of any of the distractions of modern life.

Check for an update in a few days time to see how the group enjoyed their solo experience and for more photos as they come back from the field. 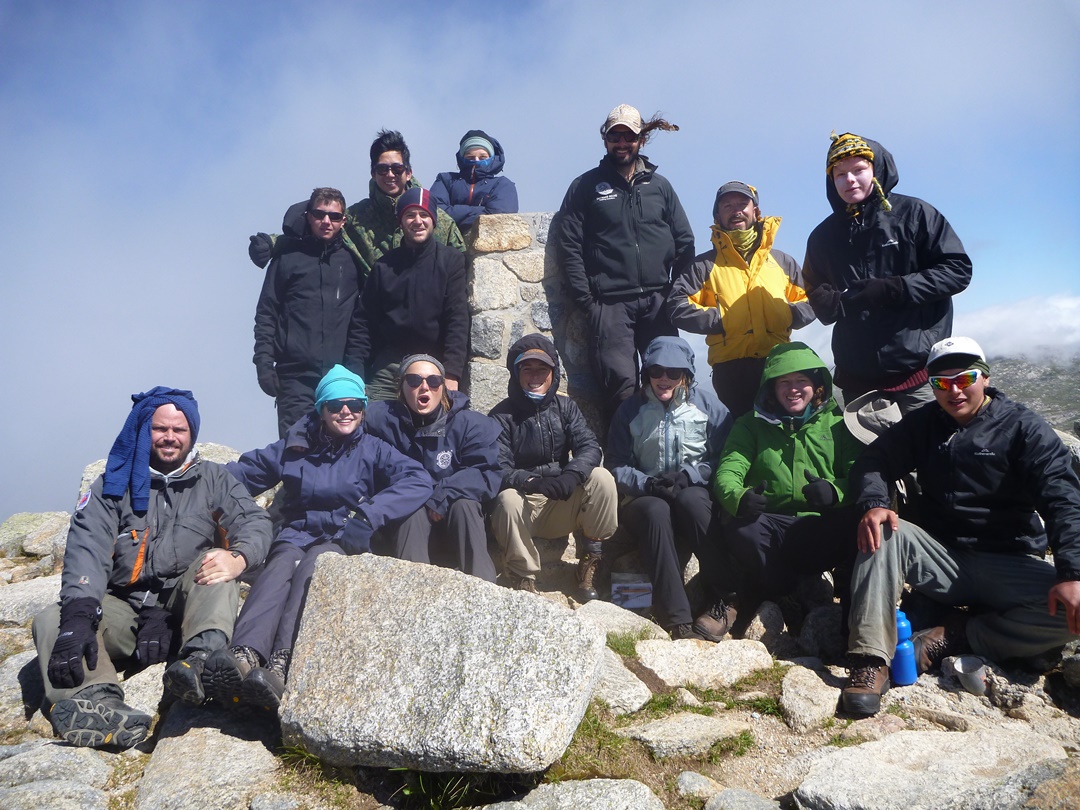 Time for a break! After moving non-stop for two weeks, the Cotters had a well-earned break. Their solo time for three nights and the better part of three days gave all members of the team some well-earned time and space to rest, as well as to reflect on their journey so far. The Cotters came back from their solo with big smiles and lots of enthusiasm for the next stage of their course.

A highlight of the debrief after solo were the gifts to the group that individual members created during their time away. These gifts included poems, bush craft and personal insights, and really highlighted the friendship, openness and trust that have formed within the group.

After finishing their solo, the Cotters were straight in to their next activity – caving! Unlike better-known “show” caves the cave explored by the Cotters involved a good amount of mud and narrow tunnels that could only be negotiated on hands and knees as well as the larger, more scenic chambers, often associated with caving.

Travelling through a cave presents a truly unique set of challenges such as squeezing oneself through the narrow “Tunnel of Light”, or moving through a chamber with no head torches on and having to rely on all the other senses. Caving also involved a lot of fun, with some underground sing-alongs, as well as a game of sardines!

After cleaning up after the caves, it was time for the Cotters to be briefed on their final expedition. A traditional part of any Outward Bound program the final expedition is the culmination of the course. It offers new challenges and tests everything that has been learnt so far.

For the Cotters, their expedition will be four days of hiking some of their biggest distances yet through difficult terrain. Furthermore, the groups are travelling without any assistance from their instructors and to top it all off, they have been split in to two separate groups. After receiving their list of checkpoints, the Cotters set about organising their route plans as well as all of the logistics of their next four days.

Seeing these preparations, it was very satisfying to note the competence and confidence that had developed since the first few days of the course in Tharwa. The hike itself will take them to within 12km of the much anticipated ocean, and there is much excitement as the conclusion of the journey draws near.

The two groups, named by their members as Genesis and Exodus (possibly because of the biblical scale of the distances to be covered?), are currently out hiking.

Check back in a couple of days to see their progress!

Both groups encountered multiple challenges on their final expeditions. Both of the groups at one time or another became geographically misplaced (lost), but were able to eventually locate themselves.

The four days of expedition were big ones, with some late nights, including one group walking until around midnight to make up on lost time. Though both groups had struggles at times, they all reported the immense satisfaction in completing the expedition and solving problems for themselves without any help from their instructors. The two groups, Genesis and Exodus met up unplanned on their final day of hiking and completed the last 20km together. The group arrived at Aunty Glenda’s campsite around 8.30 on the evening of their fourth full day of hiking, just in time to see the sunset. 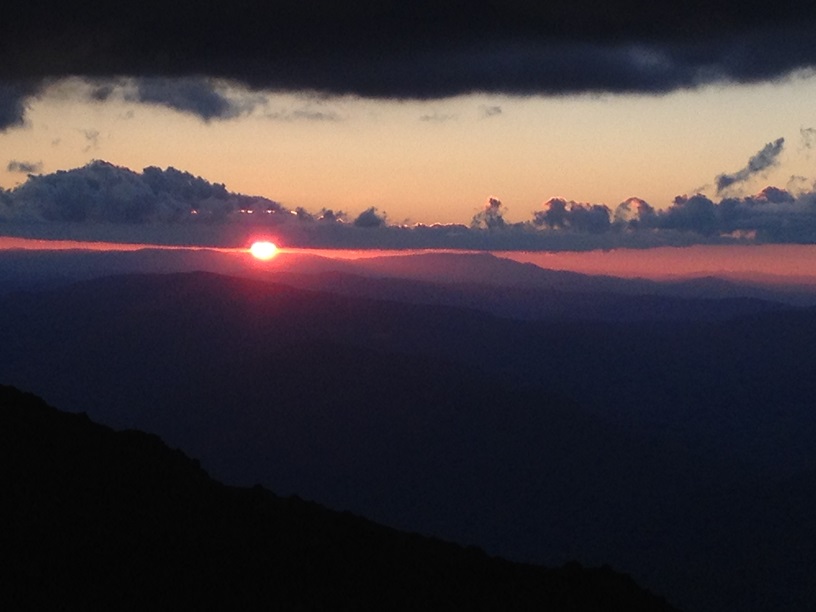 After doing a small service clearing some timber for Aunty Glenda, the reunited Cotter crew embarked on their final challenge of the course – a 14km run that would complete their journey to the sea! After looking forward to this moment for 26 days, The Cotters completed their run along the beach to the mouth of the Snowy River. Having scaled Kosciuszko and seen the Snowy River where it is scarcely more than a creek, this was a fitting place to finish their journey. Although the weather was cold and a little wet, the group, having run individually, banded together for a charge in to the salty water.

After enjoying a bacon and egg roll each for breakfast, it was time to conduct some community service by visiting Lochiel House, a local aged care facility. There the group took part in some arts and crafts, but mainly just took the time to spend time with some folks whose adventuring days are behind them but who nonetheless had lots of stories to share, and who were very keen to hear about the epic journey that the Cotters had just been on.

The afternoon was spent in reflection and discussions of everything that had passed on the course, and everything that was to come on people returning home. Well-fed with a celebratory BBQ dinner and soft drink, it was time for bed.

The next morning, after some final cleaning and presentations, it was time to leave from Marlo and hop on the bus to Bairnsdale.

No doubt the group are all enjoying the comforts of home right now and have plenty of stories of their own to tell! They’ve just completed a monumental journey full of challenges and should all be proud of everything that they’ve accomplished. 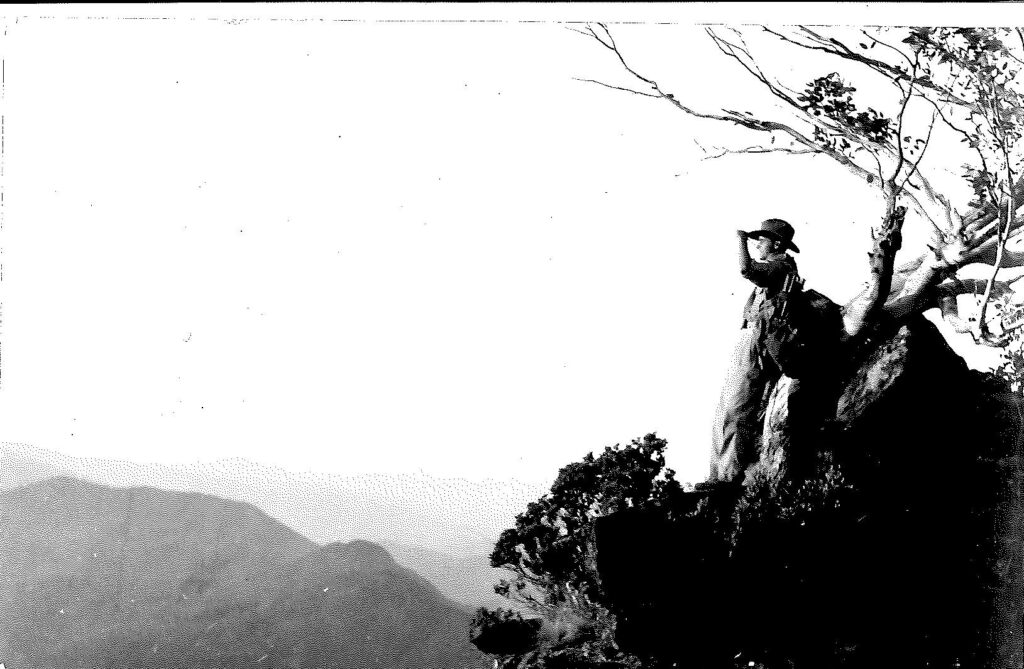 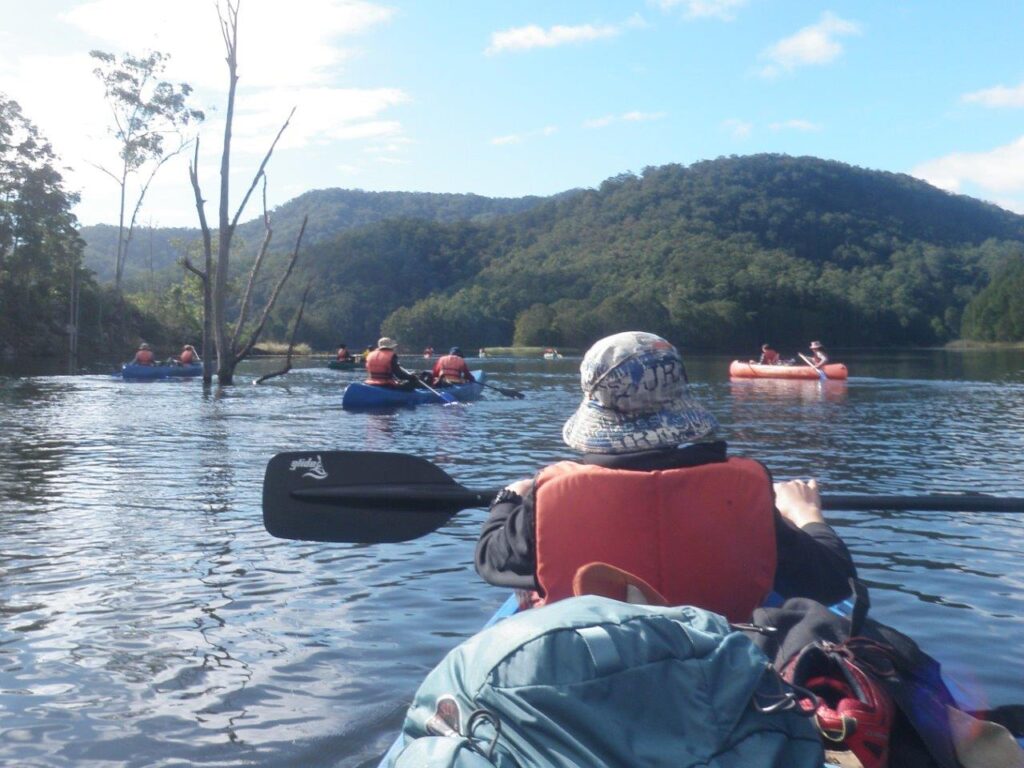 Young Explorer – Rainforest – July 2018
All Articles
Subscribe to
our eNewsletter