The Spring Australian Alps Navigator has commenced! All participants arrived safely from various parts of the eastern side of Australia. After initial welcomes and introductions, including an expectations session and the significant ceremony of raising the Blue Peter Flag, participants spent the remainder of the day being issued with the equipment they will require for the remainder of the program. This included briefings on thorough camp site set up and their first meal prepared and eaten around a camp fire – spaghetti bolognaise! The initial nervous energy to be expected from a Navigator Program soon settled as the group got to know each other better and routines began to be established. It’s looking like a busy but rewarding 12 days! 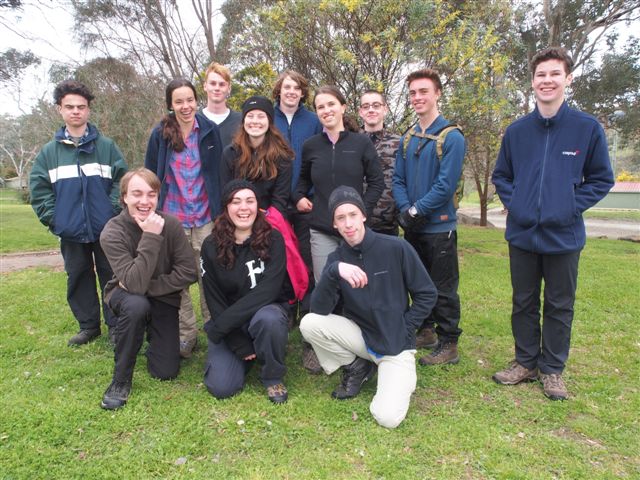 Despite the cool start to the morning, the group still tackled the early morning ‘fun, run and swim’ with high energy. This was followed by an in depth exploration of the high ropes course, involving both individual and team elements, which certainly stretched everyone’s comfort zones. The afternoon session was then spent on an environmental service project which involved tree planting. This was once again led by a long term volunteer and supporter of Outward Bound Australia, Tim Booth. His passion for the environment is obvious and through his engaging stories the group developed a greater awareness of the environmental benefits of this activity. After a well-earned lunch, the group spent the afternoon again challenging their comfort zones on the climbing tower before heading off base and into the bush for the first real wilderness experience.

Another early morning start, with today being all about navigation. The group was split into two so that they could really focus on improving their understanding of topographic maps, bearings and compass work. This theory was then put into practice with a check pointing activity. Then it was time to do some serious navigation prep as the instructors shared with the group the grid references and check points they will need to reach on their first expedition. It will be a big few days with this first expedition leading the group up and over Mt Tennent and onto Booroomba Rocks, a classic walk through the magnificent Namadgi National Park! 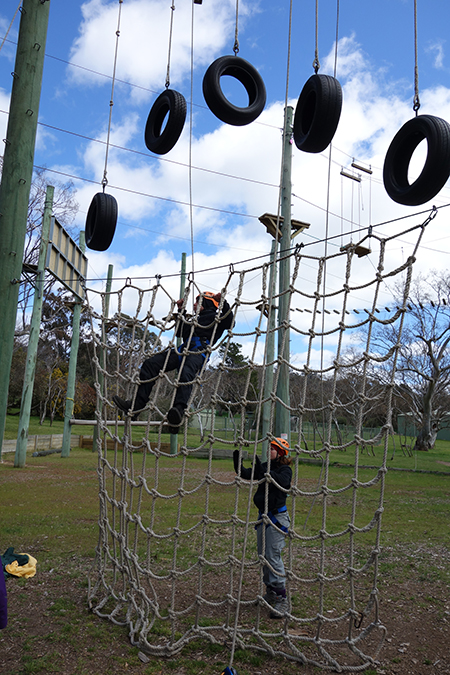 Today saw the start of the teams three day expedition over the mighty Mt Tennant. This mountain is a classic challenge and the first significant test for Alps expedition to come. The crew however handled it with style. Although by the end of the day most were exhausted and were happy to get to bed early after a delicious carbonara (made by the group) and delightful hot chocolate. 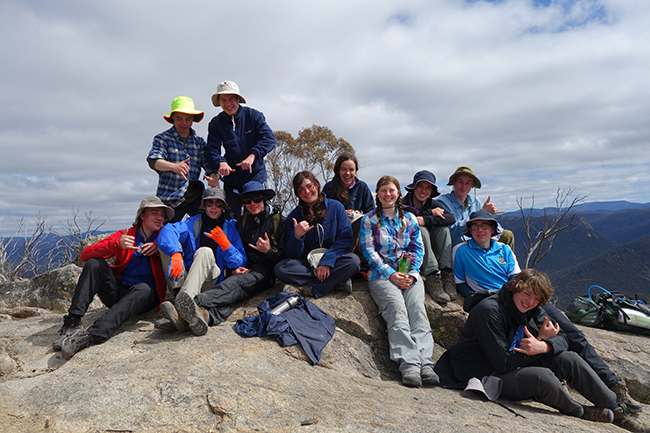 After besting Mt Tennant the previous day the gang were feeling confident heading into the days hike. Today saw them continue up and over Borromba Rocks via the iconic Australian Alps track. Namadgi National Park never disappoints as the group saw some stunning views from the top of the rocks in ideal weather. The team dynamic is growing strong, evidenced by the crew making it to the top together and in good spirits.

A sense of accomplishment and comradery is obvious in the group and both instructors are impressed with the spirit and courage from all members of the team. 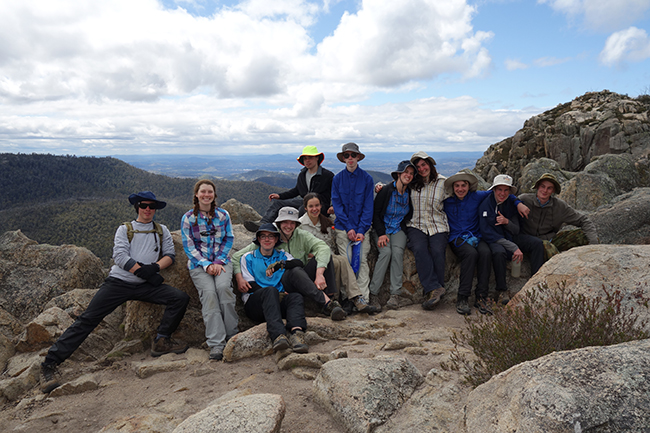 This morning the group were surprised with a delicious treat of pancakes for breakfast after two long days of hiking. These were quickly eaten and enormously enjoyed before beginning the final, and what would prove to be the most difficult day, of their first expedition. The navigation was tough and initiatives along the way proved frustrating. The gang persevered and made it through to camp regardless and a great sense of relief was palpable, leading to a fun and relaxing evening.

Even though the team had a tough one, everyone agrees that they are stronger for it and look forward to the rest of the journey. 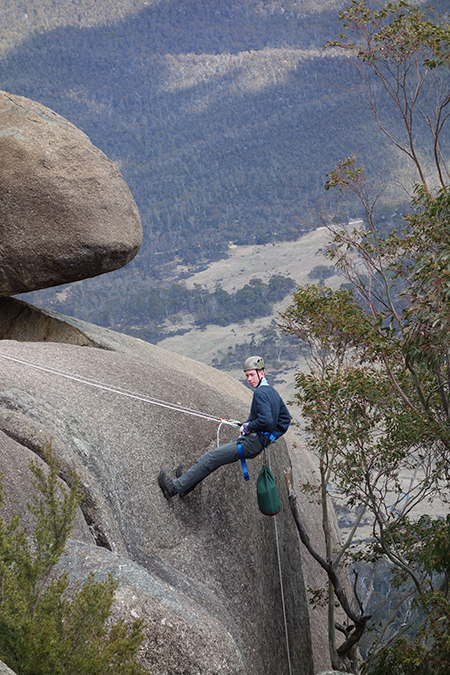 The team was in for a treat today, after a short hike they made it to a place called Lego Land. Here they got to play in the caves and passages of the impressive boulder garden, culminating in what is called the ramp. The gang climbed to the top of the ramp and saw the stunning view of the Orroral Valley from 500 meters up. After this activity, they continued along the ridge to the abseil site, here they geared up for what was to be (for some of them) their first abseil. Many of the guys agreed that the abseil was challenging and stretched their comfort zone. Nonetheless all showed excellent bravery and everyone made it to the bottom in one piece.

The journey continued in the afternoon descending to the valley below via an off track ridge. The crew made it into camp successfully and in high spirits. 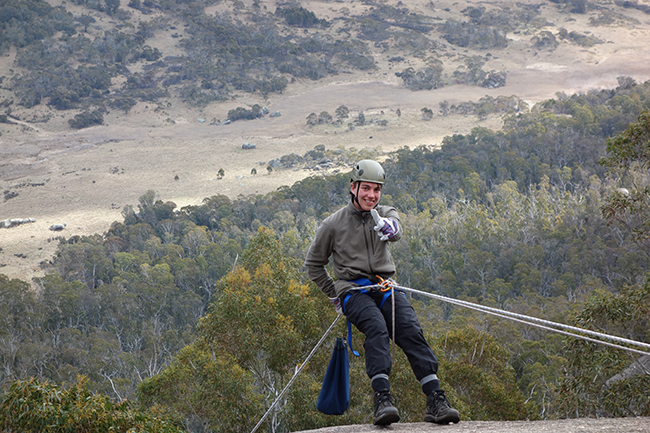 Today the team was presented with a challenge of a different style, twenty four hours of solo time. It was an early but efficient morning with everyone finding their own space by 9am. This challenge is not physically demanding and most were looking forward to the rest time this activity offered. As well as the opportunity to reflect on the journey that’s been and what’s to come both literally and metaphorically.

Instructors were impressed with everyone’s input over the last few days, especially the effective teamwork on display by all members. The leaders are also happy that everyone is safe and are looking forward to the next few days as the team will be well rested for the final expedition.

Today saw the guys get off their solo challenge which some people found difficult to go from complete solitude back to a group setting. Regardless the guys were back into it, getting geared up and prepared for the last and perhaps their biggest challenge, final expedition. But first the crew was able to talk about the journey that has been and what’s coming up, not only for the course but for their lives as well. Good feelings all round and well rested the team are feeling ready for their expedition starting from nursery swamp then heading into the wilds of Namadgi National Park.

Today saw the team off on their hike and the last few days at Outward Bound. It wasn’t all rainbows as the guys were having some problems keeping everyone together. The gang pulled it together and made their way to Rendezvous creek and into a beautiful campsite over-looking a valley. A long day for the crew but a successful one as well as they look forward to their last full day and perhaps their last big challenge tomorrow. A key learning for the day was the importance of respecting others and the value of working together as a team.

Today proved the hardest part of the journey thus far with 16 kilometres of hiking covered through the bush, up and over ridges and ranges. Emotions and fortitude were tested as the team wanted to finish strong but commitment to the end was wavering. Even though some thought it wasn’t possible and they couldn’t do it, they proved themselves wrong, successfully completing the expedition. They were surprised to find buses at the bottom of Mount Clear which took them back to Tharwa for their final night to be on base. Everyone was exhausted but awfully proud of themselves on their achievements.

Today was a relaxed day compared to the rest of the program. The crew woke up and helped out Outward Bound by cleaning and storing their gear, they were thanked with a delicious BBQ breakfast cooked by the staff. It was then time for a shower, which everyone loved as they had gone twelve days without one. Their time at Outward Bound ended with an award ceremony, everyone said their last goodbyes as parents started to arrive. All of the participants agreed that this had been an insightful and unforgettable experience. 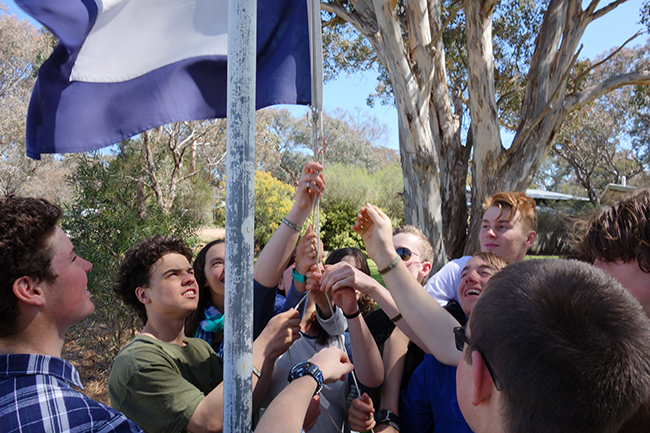 Outward Bound Australia would like to thank all participants on the 2015 Australian Alps Spring Navigator. Don’t forget that you can share this blog with your friends and family on Facebook & Twitter by following the prompts at the top of this blog. 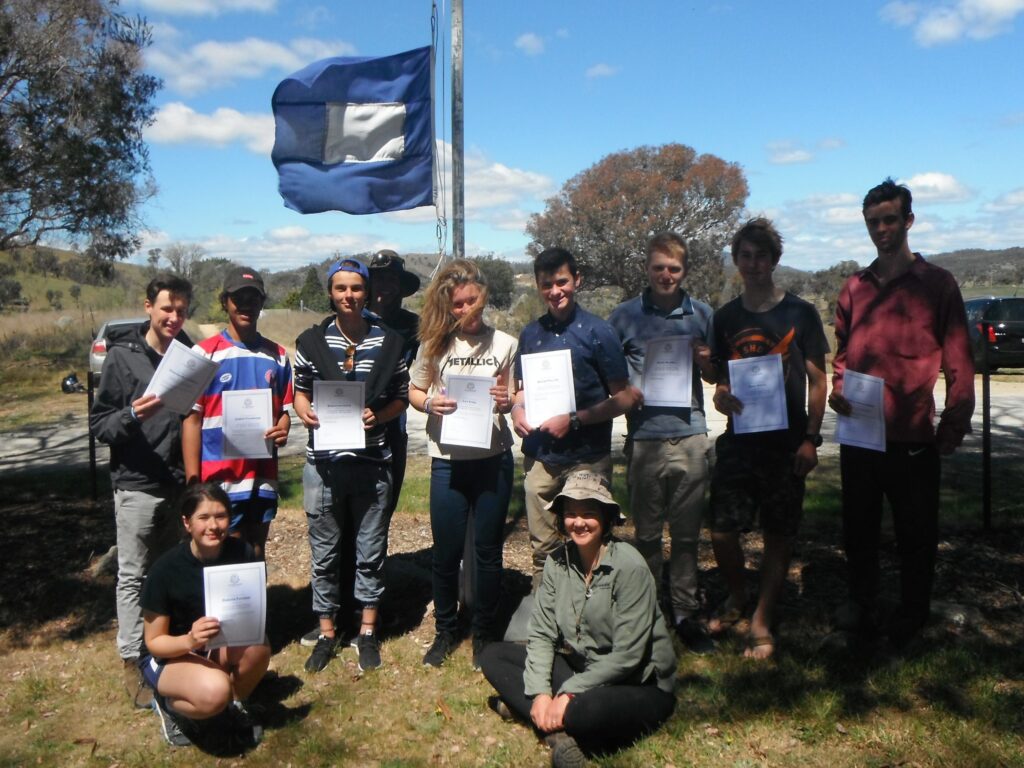