Welcome to our Australian Alps Navigators! It has been a hot start to program but this has not stopped this adventurous group from getting into the full swing of this program. After initial introductions and an expectation session, participants were invited to help raise the Blue Peter Flag to symbolise the beginning of their 12 day journey, knowing that they will be supported by Outward Bound staff along the way. It was then off to gear issue and camp site set-up before preparing for their first night camping out in the bush.

Day 2 started with an early morning jog to the Murrumbidgee River and a successful attempt at the group initiative activity ‘Water Bomb’. Thankfully the river levels are up so the group enjoyed an early morning splash before taking on the challenge of the ‘Giant Ladder’, where participants work in pairs on the high ropes course and the group acts as a belay support. With another hot day forecast, it was back down to the river for a raft building activity and then onto their next camp site. 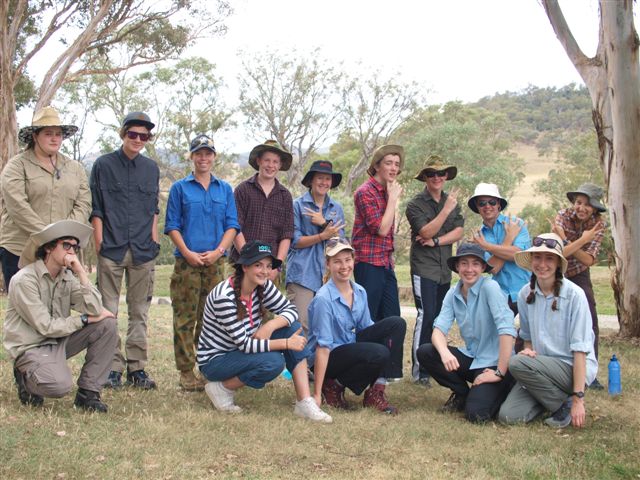 Time to learn the all-important art of navigation, a cornerstone of outdoor education! The day started off with some navigation lessons, which were quickly put to the test as the group walked through a beautiful valley, hitting check-points the instructors chose. Temperatures were rising so the group had a much needed swim break in the Murrumbidgee River, relaxing in the shade and getting to know each other better. After a few outdoor education games, the group was ready to start off again, but they found the afternoon much more challenging than the morning session. They were running a bit behind schedule after the swim, but the group really pulled together and worked effectively to make up the time and get to camp with plenty of sunlight to spare. Although they had a tough day of navigation, everyone was in high spirits upon reaching camp, as there was a special surprise awaiting them there; Ice blocks! After finishing their well-deserved treat, it was all hands on deck to get camp set up and dinner cooking. This energetic bunch were laughing loudly and helping with every camp job without complaint which is great to see, especially as it’s only day 3! 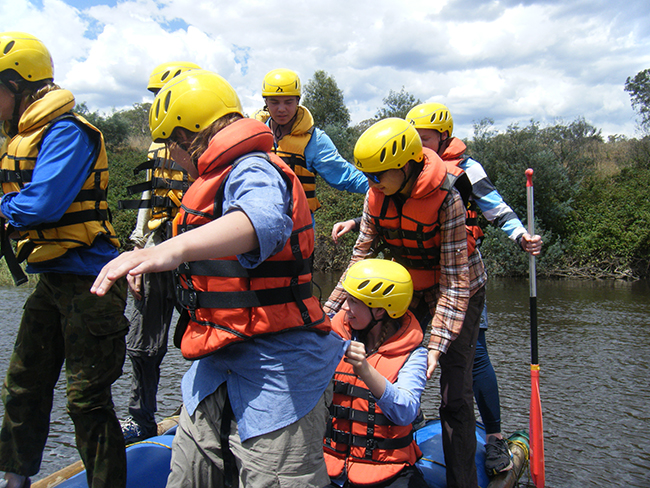 The group had a massive day today, waking up at 5am and walking up and over the picturesque Mount Tennent. This hike was a great example of experiential learning – or learning by doing- as the group had to keep their attitude positive and remain driven in order to summit the mountain and descend into the valley before dark. The instructors really let the mountains speak for themselves and the team continued bonding through this shared challenge. At the summit, the group said they were very tired but a stream of accomplishment ran through the group, knowing they had encouraged each other and worked together to accomplish such a feat. Interestingly, the group said the most challenging part of the day was reflecting on the hike once they were in camp. The instructors ran a great debrief and the entire group shared their thoughts and feelings about what they had achieved that day. There are some visible signs of personal development in many of the participants as they are beginning to drop that ‘me mentality’ and are starting to focus on the group and the needs of others.

The group got a sleep in today after yesterdays’ hike up and over Mount Tennent. The day started with a leadership activity displaying the important traits of a leader and how each participant can personally develop these values. Each day two participants will take a leadership role within the group, organising wake up times, camp roles and responsibilities and are responsible for the whole day. The leaders of today were very effective in ensuring the group remained positive and energetic on the hike. Great learnings were achieved today when the group reflected that although everyone did the same hike, there are unique with different reactions from each individual, both mental and physical. The participants are clearly undergoing some personal development in the form of teamwork, resilience and understanding of each other.

Day 6 started with a special breakfast of pancakes! A few sleepish faces this morning as they woke up, but the sugar soon kicked in and they were ready to navigate to their next campsite. During the relatively easy day hike, the group stopped for an outdoor education initiative relating to goal setting and how smart planning can lead to success. This will definitely be needed in the up-coming days, as the group starts gaining more and more control over the program and take on more responsibility. Personalities are blossoming within the group and it’s now very apparent each member is vital to the group’s success. The initial awkwardness of camping with complete strangers has worn off, and strong bonds are forming. After walking to camp, dinner was cooked and everyone hopped into bed, excited for tomorrows promise of abseiling!

Today the group tackled their fears of heights on the abseil! They started off with a tour of Lego Land, a huge boulder field of nooks and crannies to crawl through, discovering the ultimate ‘Pride Rock’ which overlooks a huge valley and beyond. After scuffling through this maze of granite, the group had a quick lunch and set off to the abseil site. The instructors emphasised the need for support and encouragement during the abseil activity and so a huge chorus of voices was heard each time a participant went over the edge! Among the group were some nervous facers, but 100% completed the abseil which is a huge achievement. After this, the group had a buddy walk down to camp – where they walked in pairs with a person they aren’t particularly close with and learnt about this person. Given three questions to discuss as they walk, the group gained valuable insight into their friends and as such, have formed tighter bonds with those around them.

Wow what a beautiful day in the valley! Temperatures were very hot today and the group did an excellent job of continuing with their activities in the heat. First up was Water Watch, where they give valuable information about the water quality to our local university for studying and research. They got to be scientists in this activity while measuring Ph contents, turbidity and using other gadgets to test the water. This was a great example of experiential learning, where the participants learn new skills and information by getting down and dirty and actually doing the work. After this, it was time for solo, where each individual is put out in their own patch of bush and stays there for 24 hours. They were given just the basics; a tarp, pegs, cord, rations of food and water. Some were anxious to spend a night alone and others were roaring for the opportunity to live like ‘Bear Grylls’ in the forest! Everyone emitted a cry of exasperation when they had their watches taken off them, no time keeping on solo, which for some was the most challenging part! They were each placed in what would be their camp for the next 24 hours and got started on the self-reflection and personal development activities they were given to complete. A part of this was writing a letter to themselves which Outward Bound send to each participant in six month’s time; this is a great way to ensure they transfer the learnings they’ve discovered this course to their home life and beyond.

After a rejuvenating night completing their solo activity, the group debriefed and shared how they felt during the night alone. This is often a huge moment for participants as they come to terms with how much they’ve achieved and personally developed throughout the course. Then their skills were put to the test by ‘The Box’, a tricky real-life puzzle they must solve to get the treasure that lies within. Given a whole mixture of clues and hints, they must sift through and work out which are needed and which are false, quite a difficult task for a group of 15! They were successful in solving the clues and working together to earn their reward. The group then planned and organised their next three days of hiking, where they are completely responsible for all their movements and campsites. The ultimate test of all that they’ve learned this past week! Good luck to them as they hike over peaks and through gulleys to reach their final pick up location.

Today was the ultimate test of leadership and navigation! The group had an early start and began trekking the 9km hike to Mount Clear Car park. They aimed to expedition together as a team and test how well they worked as one unit. Well, the mountains certainly proved a challenge for the group as they learnt firsthand the hardships that come with experiential education. Throughout the day, the group realised their goal would not be reached, so they had some tough decision making to work through. They decided to choose a new goal and hiked to that location. They were at first disappointed, but the group learnt to continue to work as a team and achieve their new goal, regardless of how tired they were.

There were all smiles and cheering when the cars pulled up to take them back to base for their last night! The group looked overjoyed and proud to have finished their final expedition and ended the day with a final high ropes challenge. The giant swing; a mammoth swing where they launch themselves off into a free fall, usually accompanied by a high pitched scream. Finally, it was time for their last meal together and into their bivvies and sleeping bags for the final time.

Greeted in the morning by a hot breakfast, the group then had a lot of energy to clean their gear and wrap up the course. We wouldn’t send them home smelling how they did, so they rushed into the showers and scrubbed for the first time in twelve days! Looking squeaky clean and refreshed, the group had their final debrief, reflecting on the personal development and challenges they’ve faced on this course. It was great to see the changes that have happened personally and emotionally within each participant. 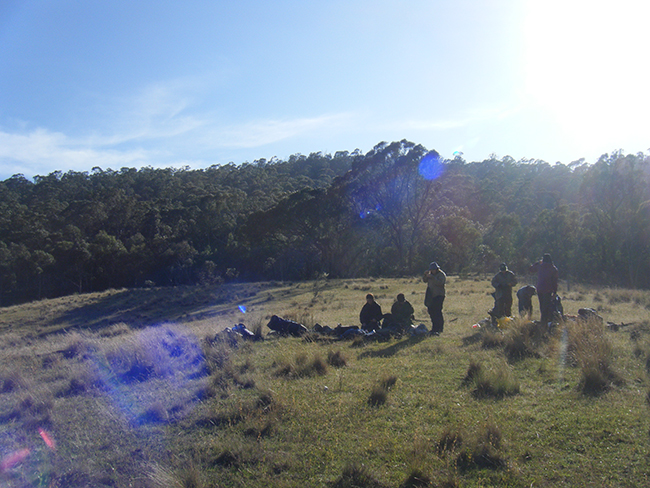 Outward Bound Australia would like to thank everyone who has followed this journey over the past two weeks. A massive congratulations to the group and we wish you the very best for the future. Don’t forget that you can share this blog via social media, let everyone know what you got up top over the holidays. Well done! 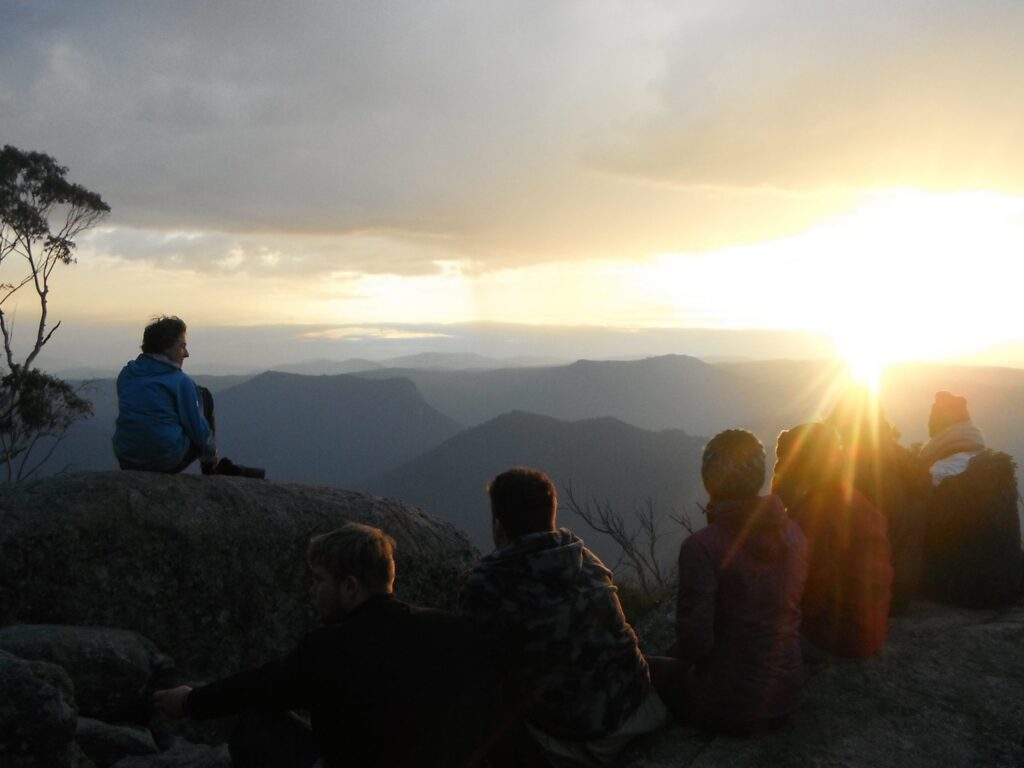 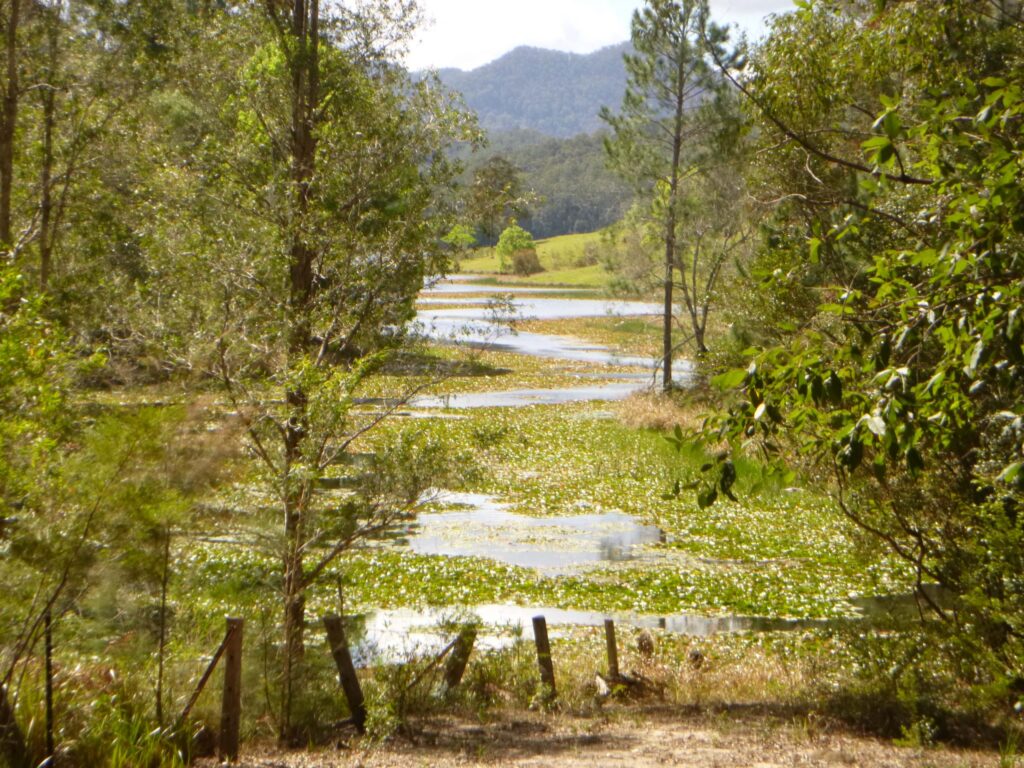 Navigator – Rainforest – January 2019
All Articles
Subscribe to
our eNewsletter