The Scenic Rim to River program got off to a great start with 13 participants arriving at Outward Bound Australia’s Northern NSW property under drizzly skies. After the initial meet and great with their fellow participants and instructors, the group started the process of sorting out the essential items needed for the following 14 day adventure extravaganza. After raising the Blue Peter flag to symbolically represent leaving the safety of harbor and travelling into the unknown, the group completed their preparation then as a group discussed what it was that they personally wanted to achieve from their experience. 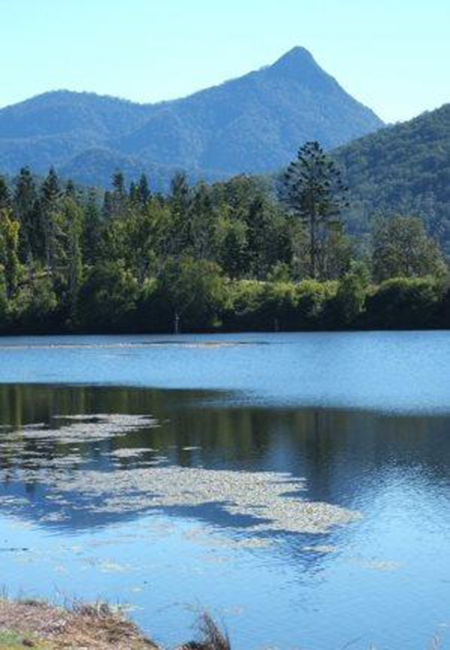 Now the fun begins! With a 2.30 am wake up to starry skies, the group was transported to the base of Mt Warning, an Ancient volcanic plug which dominates the scenery and stands proudly in the centre of the caldera. The crew then hiked under the light of torches to reach the summit just before the sun poked its head over the horizon and were greeted with a stunning 360 degree view of the surrounding countryside.

After everyone had descended safely the journey really started to move forward with the participants pairing up and canoeing across the beautiful Clarrie Hall Dam to their campsite for the night. Campsite roles and responsibilities were established with all 13 participants doing their bit to ensure everyone was well fed, warm and comfortable. After some reflection time around the campfire everyone retreated to their tents early feeling contented with the days achievements. 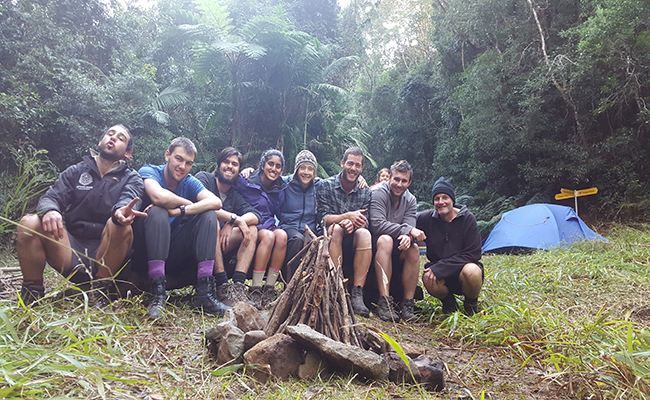 The day stared with an abseil in Mt Jerusalem National Park taking a few participants well outside of their comfort zones, some participants even went over the abseil more than once. After a short hike to their campsite, the group engaged in a ‘Service’ activity of cleaning the campsite and toilet area as well as collecting wood. Service is an integral part of an Outward Bound Australia program where the participants have an opportunity to give back to the community. The cold weather has been a struggle for some, but did not stop an afternoon dip in the freezing cold creek to have a wash and re-energise. Feeling invigorated and alive, the group retired to bed knowing that it really doesn’t matter about the water to rice ratio, it’s all food! 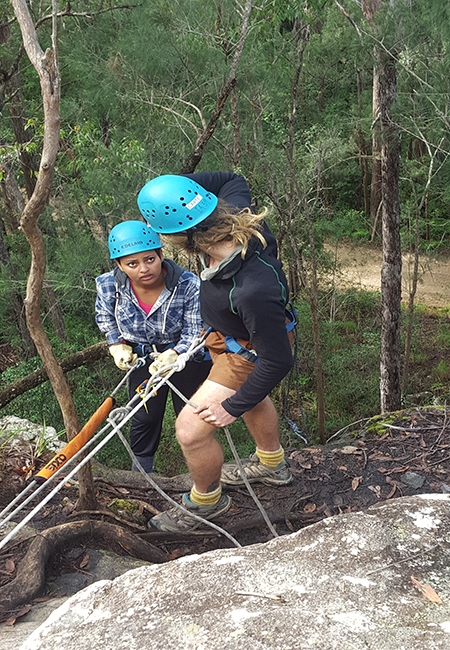 This morning the group were geared up and ready for 2 tough days of hiking through the sub-tropical rainforest of Nightcap National Park and Whian Whian State Conservation Park. The old postman’s route took the group up and over Doon Doon, where at one particular point you can see the rim of the caldera head right out into the ocean at Byron Bay’s lighthouse.

After the 9km hike with full packs, they were able to rest their weary feet at Rummery Park, home for the next 2 nights. The crew were in for a treat on day 6, as they made their way to the infamous Minyon Falls – A 100m plunge waterfall over the huge rhyolite cliffs, definitely a highlight of this region. Not only did the group get to admire the view from the top of the falls, but they then casually made their way down to swim at the base of the falls in the very clear, very COLD water. Refreshed…and clean…the group slowly, but surely climbed out of the valley and headed back to camp where they were met by Scotty and the bikes, to spend the later part of the afternoon learning the basics of mountain biking in preparation for the days of riding to come. 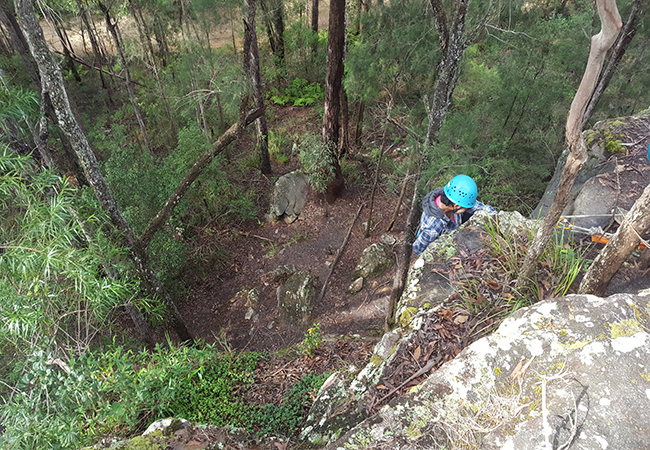 The group awoke within the Nightcap National Park to a beautiful clear, crisp morning and the start of the Mountain Biking leg of the expedition. There was a buzz of excitement in the air as their backpacks were swapped for bikes and they geared up to hit the trails. The morning was spent riding some nice flowing trails. Morning tea was had perched at the top of Condong Falls, a stunning 80m waterfall with a beautiful view overlooking the forest below. After lunch the crew had a long decent through ancient rainforest to Rocky Creek. Once the creek was crossed the afternoon was spent tackling a 5km climb from the valley floor up to their campsite high up in the mountains. This was perhaps the biggest physical challenge that the group had encountered yet they all rose to the challenge and through amazing acts of support and encouragement made it to their campsite with 3 hours of day light to spare. It was early to bed for most members tonight!

The next day saw the group continue the Mountain bike journey down out of the mountains. The first initial moans and groans about “saddle soreness” soon disappeared as they set off for 11km of predominantly downhill riding to Rocky Creek Dam. It was with some sadness that the bikes were loaded onto the trailer as for many it had brought back lots of fond childhood memories .The participants then boarded the bus to get shuttled to the banks of the Clarence River. It was here that the groups were separated from each other for the first time in 9 days. Each participant was placed in an individual campsite where they spent the next 24hrs in solitude. This “solo” time is an incredibly powerful experience that allows individuals to reflect on past, present and future. It is a rare opportunity to take time out, free of distractions and put some real thought into life.

Once Solo finished the team regrouped for a debriefing process and sharing of experiences. 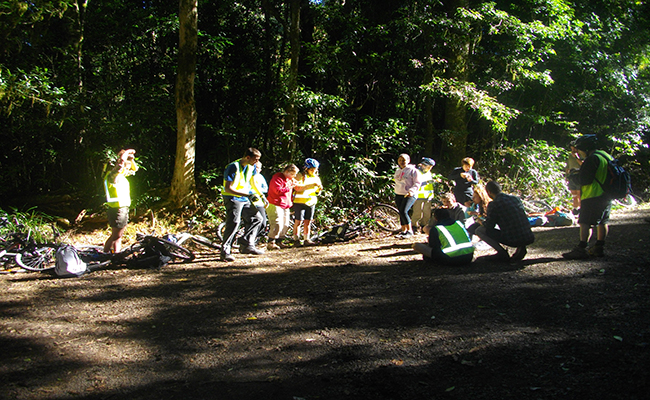 The last days of the expedition were spent paddling the waters of the Upper Clarence River. This 3 day down river journey saw the participants maneuvering there laden 2 person “Wobbegong” canoes through flat pools which are home to an abundant range of creatures including the elusive Platypus. Between these flat pools they needed to negotiate grade 1 and 2 rapids. This tested the newly learnt skills of the group with some participants even practicing their swimming skills as they failed to make it through various rapids and capsized. This change of pace and mode of transport along with the serenity on the water was a highlight for many in the group.

After being transported back to Base for the final night everyone got to partake in a HOT shower, something that seemed like a long forgotten activity. Then the final night festivities began, starting with a celebration dinner followed by reflection on what had been an amazing personal transformation in the last 2 weeks.

The last morning was spent sorting out all the gear used and saying the final goodbyes. This was an emotional time for all as strong friendships formed through shared experience are something to be treasured.

All involved said it was one of the, if not the most amazing experiences of their lives.

South West Navigator – April 2015
All Articles
Subscribe to
our eNewsletter