Outward Bound Australia’s winter Navigator program has got off to a flying start at our picturesque Northern NSW operational area. The fourteen participants have arrived from a variety of locations throughout Australia as well as internationally. Day 1 was all about meeting the Outward Bound Australia staff, organising and sorting clothing and equipment, getting to know the other participants in the group and settling into what will become the groups routine for the next 12 days. A late afternoon transport to their camp site meant the group had to be super organised. They managed this well and spent their first night out under the stars, relieved that their journey had finally begun but understandably still a little nervous about what the next 12 days will bring.

Today the group experienced their first hike with full back packs. In order to reach the abseil site, they had to hike up a steep track which proved to be incredibly tough but they felt a great sense of accomplishment once they got there and were rewarded with a great abseiling session. During this challenging activity the group learnt more about their comfort zones, and how to push these to build their self-esteem. After this session, they had great discussions on where and how to use these zones in a positive way in their lives back home. After abseiling, the group continued their hike, past Mount Doughboy, which is a volcanic plug created in an unusual and distinctive shape. It was then once again up a steep track to Doon Doon Platform, their campsite for the evening with a spectacular view of the Wollumbin Mount Warning region. 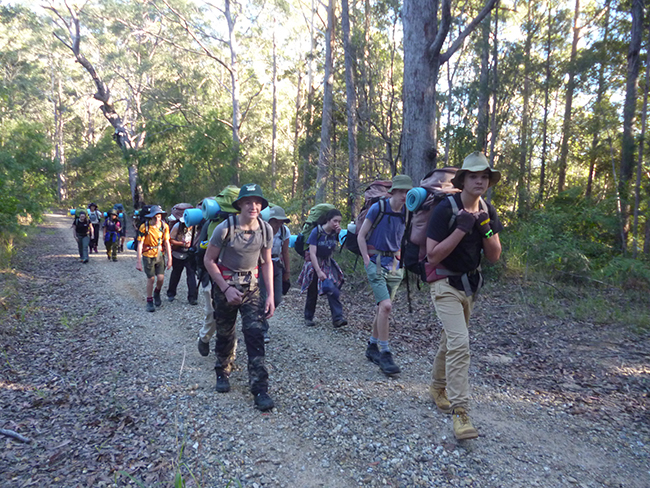 Today was the groups’ first full expedition. It was an early start to pack up camp and head off along the Nightcap Trail to Rummery Park. This walk led the group through a world heritage listed rainforest, offering breathtaking escarpment views across Nightcap National Park. During the 1800s and 1900s, sections of the historic Nightcap walking track were traversed by travellers and postal workers making their way between Lismore and Murwillumbah. This hike was a great opportunity to introduce the group to using compasses and topographic maps. By using these tools as well as looking at land features they were able to accurately estimate where they were on the map. The evening was spent resting and reflecting around the camp fire. Whilst some participants felt pretty sore and tired after a big days hike, they are still firing and look like a high achieving group is beginning to form.

Day 4 saw the group heading off to Minyon Falls for a spectacular early morning view. This waterfall descends more than 100 metres over huge cliffs which were once part of the Tweed Volcano. The afternoon saw the group heading to the beginning of their canoeing expedition, with time spent working on paddling skills. After some big days hiking, they are looking forward to throwing their packs in their canoes and heading off on a water expedition for the next few days. 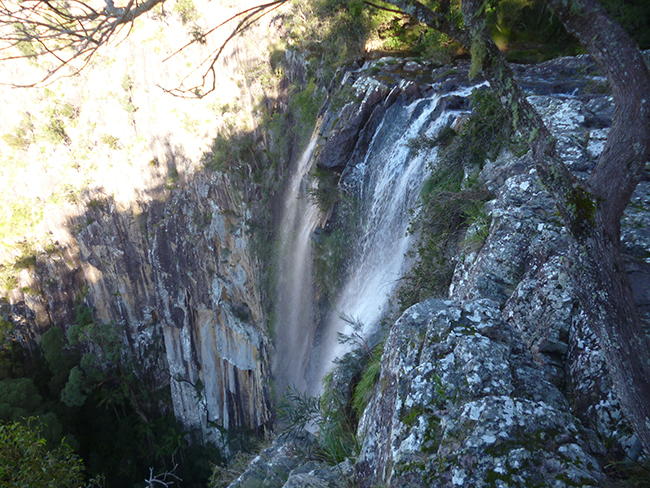 Day 5 saw the group head off on their first full day on the river. After some paddle theory and delicious campfire pizzas the night before, they got on the water. There was a great sense of relief to take their packs off and rest their legs, however canoeing still had its challenges! Working in pairs required strong communication and team work. Some thinking they were better paddlers than their skills presented, resulted in a few capsized canoes. Several members of the group learnt the value of taking the time, with skill and care, to waterproof their gear… the hard way!

Canoeing was a great opportunity to enjoy the natural beauty of this wilderness area and to look up and around as they journeyed down the river. By the end of day 6, morale was high after conquering the challenging cold morning and the increasingly difficult rapids.

The groups last day on the river came with a big push by everyone to reach the pickup point in time. Thanks to the experiential concept of ‘plan, do, review’, the pairs improved paddling and communication skills. Despite their best efforts, they didn’t make it into camp til well after dark. They definitely learnt a thing or two about utilising every member of the team around you to reach a common goal. It was a good moment for the group to realise how far they’d come and how much they had already learned, setting up efficiently and working effectively as a team.

Today the group arrived at their solo activity campsite. After a detailed briefing from their instructors, each participant was issued with their shelter and food and assigned their individual campsite. Solo is an opportunity for participants to rest, reflect and re-energise. It is an incredibly powerful activity as individuals take the time to think about their mini life Navigator journey and what learning’s they can take back to their daily lives. 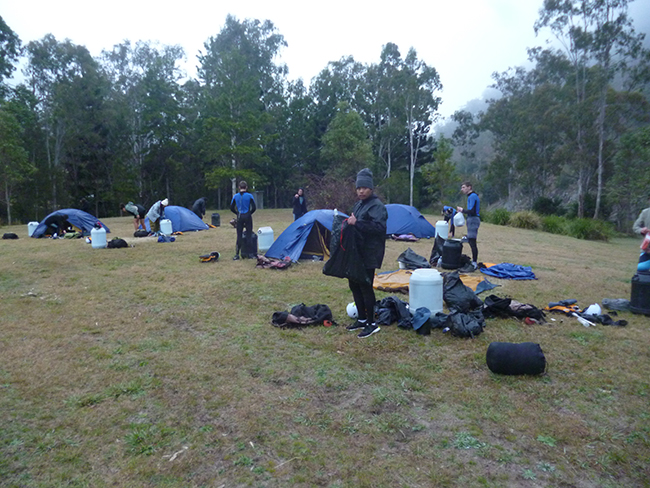 The group finished solo today. After reuniting and sharing stories of their time spent alone in the bush it was time to once again throw their packs on their backs and get hiking. This led them to “Big Ben” for a tree climb of a different kind. Co-ordinating the group as it went up and then down Big Ben proved to be frustrating as the group had to navigate climbing a tree together. But they pulled together and then went on to complete another activity called “the box” which really tested their communication and teamwork. They are motivated as a group and are really coming together for the end of the course. Tonight is Fire Watch where they must tend the fire all through the night.

Day ten was one of many ups and downs (literally!) for the Navigator crew. Kicking off with a lesson in mountain biking, the group got to put their skills to the test through the hilly tracks of Mebbin National Park. The picturesque trails surrounding Wollumbin Mount Warning, the largest plug of an ancient volcano, proved to be a fair test of the Navigators as a team. Challenges for the day included mastering the uphill sections of track, as well as learning to repair the bikes and change tires along the way. After pulling through the hardest parts of the expedition the group commented that their biggest learning from the experience was that no matter how prepared you think you are, the hardest thing to prepare for is the unpredictability of the trials and tests the environment provides! The group ended their mountain biking expedition in a state of eager anticipation of their upcoming challenges and activities, including the completion of Wollumbin Mount Warning on the final day of course.

The air was bitterly cold this morning as the Navigators woke for their final day of program. It was a 3am start to the day in order to start the hike up Wollumbin Mount Warning in the hope of reaching the top in time for sunrise. As they pulled themselves from their tents and sleeping bags and began the long walk to the top, none suspected just how amazing this morning’s view would be. The sunrise that hits Wollumbin Mount Warning is the first sunrise to reach Australia, with a view through the valley and out over Byron Bay and it’s lighthouse on the Eastern-most point of the coastline. The Navigators reached the summit in time for the spectacular view, bringing an epic conclusion to the long and challenging program.

As always, our partners and sponsors have played a big role in getting this program up and running. Their contribution ensures that even more young Australians get the chance to discover, develop and achieve their potential. Outward Bound Australia wishes to thank the following sponsors and supporters:

Thanks also to Phillip Hains of The CFO Solution in support of The Les Twentyman Foundation and the Australia Outward Bound Development Fund (AOBDF), Wenona School and Shore Grammar. 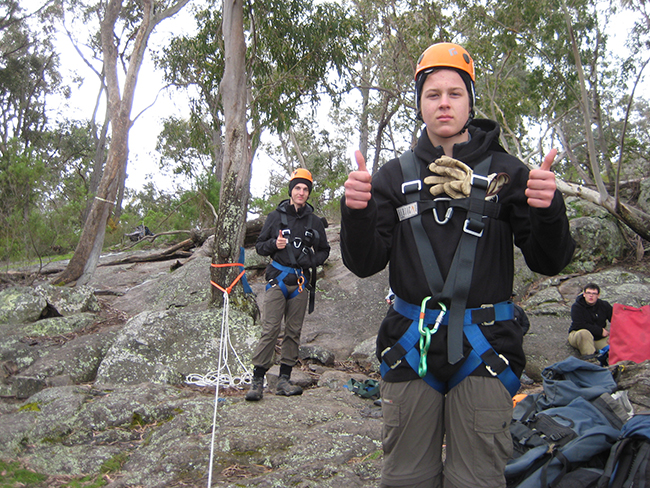 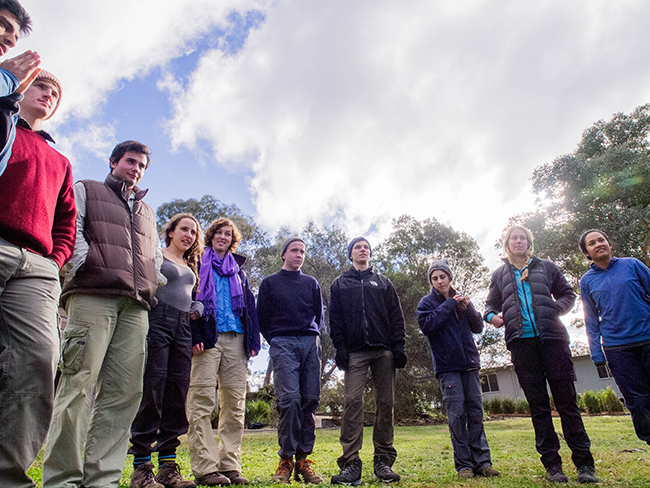 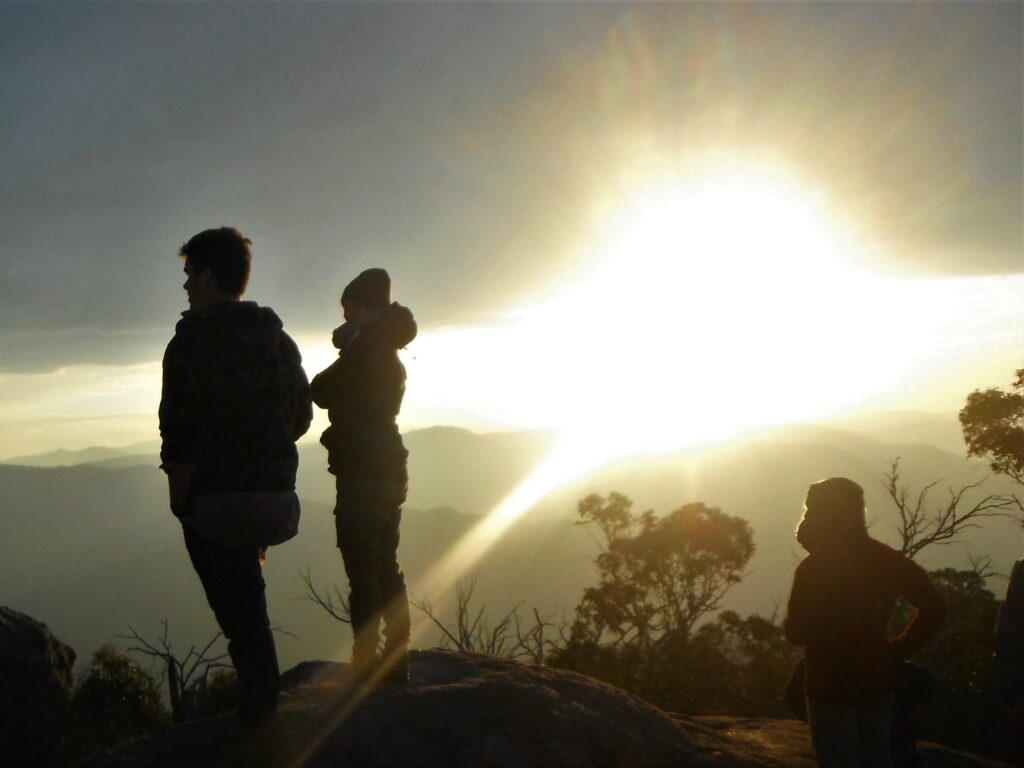